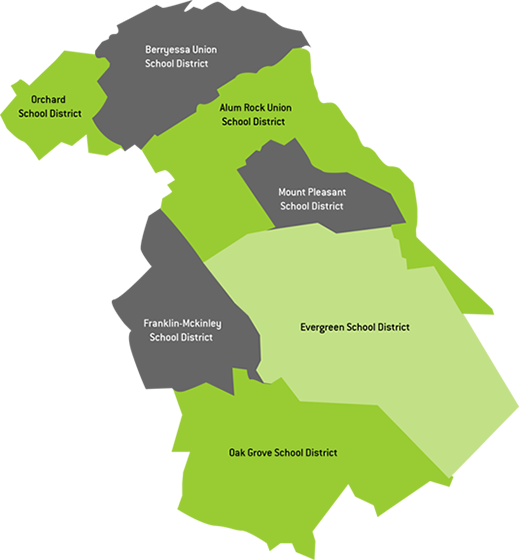 East San José, home of the 11 comprehensive high schools and 26,000 students of the East Side Union High School District, is often seen as the city’s less prosperous part of town. It is, however, a thriving, vibrant, diverse community with much to offer. Many recent members of the San José City Council are graduates of East Side schools, as well as members of the State Legislature and U.S. Congress. With a population of around 300,000, East San José would be the 75th largest city in the United States. The East Side’s ethnic diversity is well known and is representative of our nation’s evolving demographics.

In 2014, the East Side Union High School District joined with its seven feeder elementary school districts, Evergreen Valley College, and San Jose State University to form the East Side Alliance. This coalition is focused on ensuring college and career readiness, responsible community involvement, health, and wellbeing for over 80,000 students — a cohort as large as San Francisco and Oakland school districts combined. East Side Alliance members have taken on many challenges, including the creation of a common K-12 math sequence and a set of common criteria for moving through it.

Over the past six years, ESUHSD has achieved significant breakthroughs in student achievement and narrowing the achievement gap. Graduation rates continue to rise. The number of students successfully completing the A-G sequence of courses (required to apply at a four-year university) has risen well past 50%. In fact, the East Side’s A-G completion rate has helped Santa Clara County on the whole rise to among the highest in the state.

The East Side Alliance is also the single largest contributor to San Jose State’s student population. More than 700 East Side graduates enroll at SJSU each year, and the number is rising. You can learn more about how the Foundation supports these students through the Spartan East Side Promise.